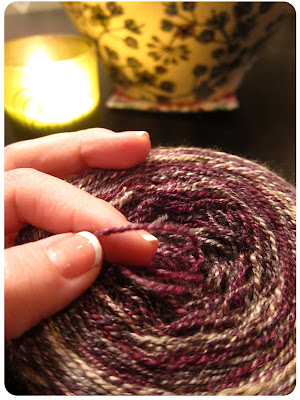 Relaxing a bit and thinking of setting up a simple knitting project for on the go, maybe some mitts.

Also thinking of making a bold move and taking over the dining room table with my sewing machine.  It would involve kicking all the Lego builds off and praying that nobody stops over to visit my house.

Should it do it?  It would be so much fun.

Can I have this swing set in my back yard?

Can I learn to screen print my own eco-friendly project bags?  I'm sure another hobby like screen printing would not take up much space, right?  Ok, maybe I'd better wait on that one.

Loving this busy little star quilt over at Blue Elephant Stitches.  It makes me want to dive deeper into working with prints.


Keeping a daily 1-liner journal - it's been fun so far.  Just a few words every day, over 5 years.  Call me in in 2018 and I'll let you know how many days I forgot to write in.  I like it so much that I'm worried I'll need another one in 5 years!


Not sure I'll need more than another dozen more of them.  I'm an optimist though with some longevity genes on my side. 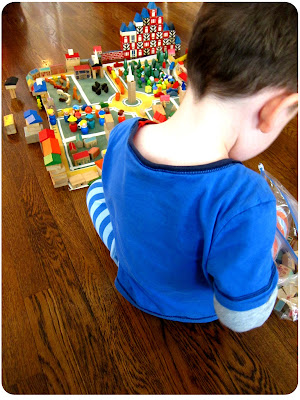 One of our favorite things to do on the weekends is to pull out all the wood blocks and build a small city.

Most are from vintage playskool village sets that I've collected, but there are a fair number from other sets that have come my way.

Our little one has a lot of energy and often cannot sit still for more than two minutes.

This time it was different.

He carefully created the most elaborate layout that I think I've ever seen.

I didn't do a lot of quilting while this was going on since I was helping, but it was quality time spent together and it was really a lot of fun.

Amazing how even the most energetic of kids can relish some serious detailed work.  I wonder where he gets the urge to organize tiny things?

I am listening to Pop Culture Happy Hour podcast.  It's awesome, it will make you cool.  Listen to it, listen to it now.  Download it on your phone using the Downcast app, and you'll thank me.

We are feasting on Chicken Paprikash - a Czech delight that my DH's parents created for us.  Not sure I have heard people talk about this dish before.  It's really quite simple and amazing.

Facts and Rumors from Stitches West 2013 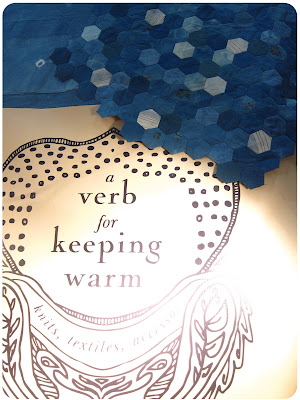 Tonight I attended the opening of Stitches West in the San Jose Convention Center.

It is the biggest knitting event in the western U.S. and many sheep have 'donated' fibers from many a haircut in order to make it all happen.
There is more amazing color here than I think I've run into in a single place.
This was just the shopping preview, and I couldn't stay long, but I did bump into a few very interesting things along the way.
In the A Verb For Keeping Warm Booth I found the Verb girls in their beautiful booth (complete with succulent plants!) surrounded by an amazing amount of color and yarns to die for.
At the register they had small packs of Liberty of London fabric, as well as scissors by Merchant and Mills.  It was a quilter's British dream come true.  These scissors deserve their own blog post really -  more on them later.

Kristine (Verb owner) has also been working with indigo dyes and fabric.  I am starting the rumor that she will be teaching classes on it soon in her shop, mostly because I personally want to enroll.

Romi Hill, who makes the most amazing shawl pins, was also in the Verb booth and had an impressive collection of pins that were not to be missed.
I also stopped by the Becoming Art booth as well with the motivation to ask knitting designer/podcaster/goddess Alana Dakos to create more knit patterns for little boys.  I'm not sure she's about to write an entire book devoted to boy knitwear, but call the idea seed 'planted'.

I did buy her pattern for the Little Oak sweater which I have good intentions of knitting.  We'll see how that goes.  I also picked up her book called Annie and the Swiss Cheese Scarf which we read for storybook time with the kids tonight.  It was a huge hit!

I'm taking a knitting class on Saturday morning.  It's on using more than 1 color of yarn at a time.  Maybe I'll pack some hand quilting in my purse in case the going gets tough.
Either way, enjoy a couple more photos and stop by Stitches West this weekend for some serious color inspiration if you have the time.
﻿ 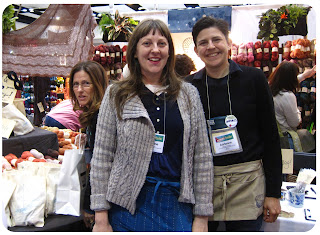 Above:  Kristine and Aday from in the A Verb For Keeping Warm booth 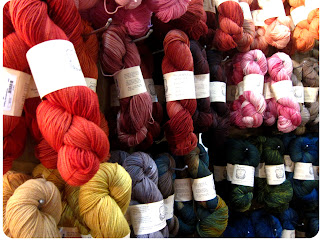 Above: Hard to believe that the above yarns were ALL dyed with naturally based dyes, no acid dye.  It's true, and it's a sight to see in person.﻿
Posted by Marisa at 11:41 PM 2 comments: 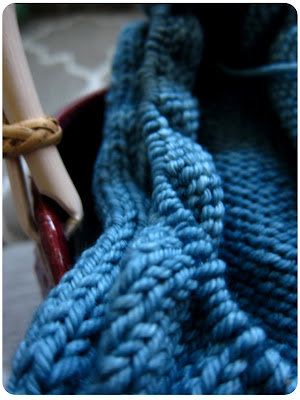 I decided to knit a toy.

It's in the shape of a piano.

For a person who is pretty good at quilting and still learning what to do with yarn, the pattern was a bit of a tall order.

Thankfully my quilting friend Susan knit the tough part for me.  I felt a twinge of guilt, sort of a Mark Twain / paint my fence kind of a thing.

The feeling quickly passed, however.  Eyeballs have been ordered and a finished stuffed toy plinky the piano will likely be on the horizon.
Posted by Marisa at 7:39 AM No comments: 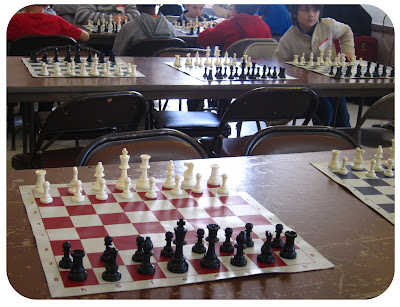 Not that we're competitive in our family or anything, but a good game of chess always gets the brain cells going.

Academic chess tournaments present an interesting opportunity for mom's to sit around for 3 hours making progress on hand work.  Games were not always won, but the chessmaster talked about 'winners and learners' instead of 'winners and losers.'

I've been looking more closely at quilts that look like a chess board lately.

Specifically, this scrappy trip around the world quilt by Monkey See is for some reason super attractive to me.

I wonder if I can muster the energy to start making one of these quilts.  Lots of little squares involved here.

I'm also loving the look of the zig zag version of a similar quilt I saw over at A Quilt Is Nice.

You probably wouldn't need a lot of the same fabric to pull off something like this, just a good sense of color value.

Ok, and about one thousand and eighty tiny squares cut, there's that.

Creativebug: I've been bitten - Make Your Own Stamps 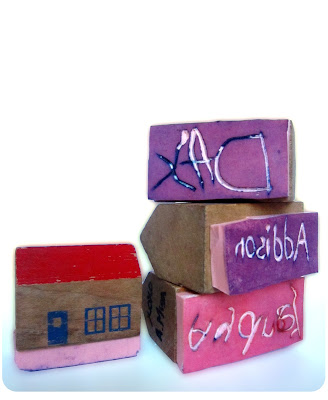 There are several online learning / crafting sites out there.

I decided to sign up for 3 months of access at Creativebug mostly because they had classes by Natalie Chanin, but also because the rest of their video classes looked pretty good.

I have been very pleasantly surprised at how cool their videos are.  Some of the classes that they have relate to sewing and I think they are planning to have some quilting classes soon.

For now, I took some classes on ceramics and knitting, but my favorite one was on making your own stamps by Christine Schmidt of Yellow Owl Workshop.

It isn't hard or expensive to make your own stamps.  You can get started for about $20, and have a really great time with it.

I asked our kids to write their names out in their own handwriting.  I then transferred this to a signature stamp for them and glued the stamp itself to a vintage wood block in the shape of a house.

Kids love that they have their very own signature stamp.  Capturing their little kid handwriting is fun, and having a stamp is super cool.  It's like a snapshot in time of their writing.
Posted by Marisa at 7:09 PM No comments: 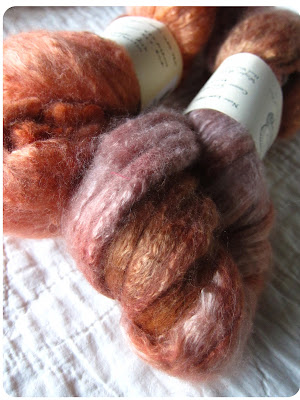 Photos are still being posted of the Tokyo Dome Quilt show.

All of them are a little different, and in their own way amazing:

Julie of My Quilt Diary has several posts. They are all 'do not miss them'! Part 3 has the most blue and white quilts - some of my favorites:

Cynthia at A Quilter By Night has photos of different quilts, equally amazing.
My favorite quilt of the show may be this one - called "To Those Who Have Become The Winds" - so Japanese, so beautiful.

I do also love the octopus quilt though.

Thank you to those lovely photographers who let us feel like we were there too.

I'm doing a little spinning of some merino and silk fiber from A Verb For Keeping Warm.  We'll see if I can make something interesting out of it.

Verb has started to dye indigo fabric.  I'm looking forward to running into it in person sometime.  Would make for some awesome quilting.

Put A Bird On It 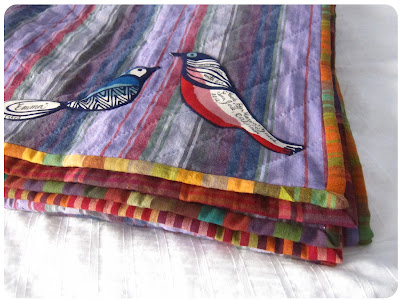 I'm not saying that the TV show Portlandia is 'G' rated, or even that all their material is funny, but sometimes they really crack me up.

One of my favorite skits is Put A Bird On It, where they take regular objects like T-shirts, and coffee cups, and make them 'cool' by putting pictures of birds on them.

It was so super funny.

Before I saw that skit, I had the quilt label for my niece already created and of course it is made out of a couple of birds.  Does that make me 'on target' with pop culture, or should I consider moving to Portland in order to fit in?