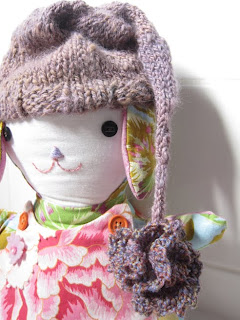 I hand spun some naturally dyed fiber that I got at Verb (is there another place to get fiber? I think not!) and knit up a super super tiny hat.

My new baby niece needs to be spoiled so no commercially created, acid dyed, itchy scratchy yarn would do. No no no. This baby needs cashmere, merino, and angora hand spun by her favorite (ok, I'll admit and only as well) aunt. More info on ravelry here.

The bunny that is serving as my 'model' here just so happens to have the same sized head as a newborn baby, so it's an interesting and handy way for me to check if the size is right or not. I sort of made up the pattern but it is inspired by the cover of Joel Hoverson's "More Last-Minute Knitted Gifts."

Don't tell my sister, but I'm trying to surprise her with another baby hat in a different shape. She has a 2 week old baby, so I'm sure she doesn't have time to read my blog these days. Let's keep this quite, ok?

Oh, and last Saturday one of my amazing quilting friends took us on a whirlwind tour of San Francisco to explore a bunch of quilt related shops. I will compile a list of links with some info on them in case you need to plan your own similar trip someday. 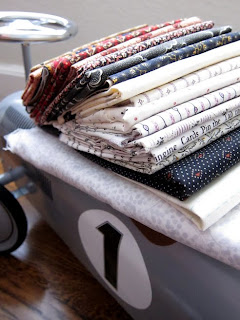 Those of you who guessed I was in the mid-west when I took the photo for my last post - well, you were right!

I was outside of Chicago, IL in this town called Barrington. The quilt shop - well worth a visit - is called A Touch of Amish.

They have a big selection of reproduction fabrics, shirtings, and fabrics that would look really nice if you are working on a traditional quilt pattern. The ladies who work there are very friendly, and the number of bolts of fabrics they have is pretty impressive.

Fabrics I picked up there are photographed above.

The first one is The Quilt Merchant in Winfield, IL. Have you ever been there? It looks like they specialize in Civil War reproduction fabrics. It is on my list of places to hit next time.

The second shop is Pieceful Gathering in Fox River Grove, IL. It was probably within driving distance of where I was, but we were on a very tight schedule with our grandmother's birthday party, so did not make it here either. I'm sure I'll be back to Chicago again for family visits, so will certainly not miss this next time.
Posted by Marisa at 11:48 AM No comments: 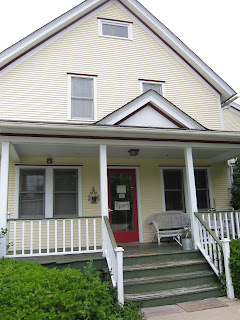 Well, leave a comment if you can guess where I was when I took the above photo.

More stories coming soon about what I did there, and what I could have done in the general area (and didn't! AAHH) and you'll also know what part of the country I spent my summer vacation.

Hope your week is wrapping up well. I have a huge and very quiltish weekend in store!
Posted by Marisa at 11:05 PM 6 comments:

Pacific International Quilt Festival 2011 - everything but the kitchen sink 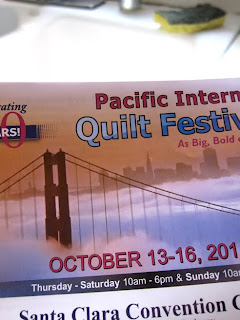 Our visit to gramma's 90th birthday is over and fun was had by most.

The party itself was awesome, and it was great to see her. She really loved the scarf that I knit for her and we posed with her wearing it for a photo together.

My husband and little one managed to come down with a summer cold as we were traveling so they had less fun than some of us.

The boys did see fireflies for the first time though (we don't have them in California) so that was magical.

Speaking of magical, what to my wondering eyes should appear in my mailbox while I was gone but the Pacific International Quilt Festival 2011 catalog.

Time to mark your calendars: San Jose, CA on October 13 - 16th! Classes are open for registration. I was surprised that there was even a small amount of hand work classes listed, so that seems nice. There is also a class on how to photograph your quilts which I found very interesting.

Entries for putting your quilt in the show are due Sept 1. I don't think I'll be entering anything this year, since I'm planning on winning Best In Show next year with my taupe modern house quilt (ahem).

Gift for the 90 year old who has it all 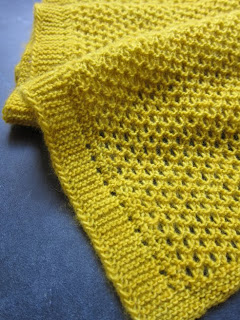 Our gramma is turning 90 next week, and for some time now I have been thinking, "Gee, what can I get her?"

Well, she used to knit a bit and I think she likes handmade things, so I ended up knitting a small scarf for her. It's in a crazy golden color, one of those striking jewel tones that I like a lot. I hope that she finds it soft and comfy and that it brightens up her birthday.

I have some notes on how I made it in ravelry here, but the pattern was very easy to memorize even for somebody who is really a quilter and occasionally fakes knitting projects.

The yarn I used is Malabrigo lace weight yarn which is so soft, I cannot tell you in words how soft, you really just have to touch it yourself. It did have some knots in the ball though, and I think knitters who know what they are doing really hate those. I kind of ignored them and kept going (probably not the right thing to do, but come on here, I'm a quilter!).

I also got her an electronic photo frame and my DH is helping me fill it with photos of the kids. Probably she will like that a lot better than the scarf, but I wouldn't blame her.

So here's to us all living to see 90, living to still do aerobics at that age (as our gramma does), and to gracefully getting older since - gosh - isn't that what we are sorta doing anyhow?

And Yes, I know I agreed to stop buying things on Etsy (or at least try to stop!) but I could not avoid one very tiny relatively inexpensive little teenie thing....Retro Scandanivian Style Star Wars Posters!

Maybe they sell 12 step program guides on how to give up Etsy...Hey, can I buy one of those on Etsy? Ahhhhh!
Posted by Marisa at 10:16 PM 3 comments: 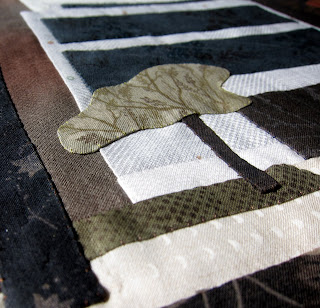 Another teaser photo of the latest taupe modern house block. Next class is the 26th of June at Verb - join us if you can!

I am thinking of putting the patterns up for sale on my blog, but it's been on the busy side lately. That will be my project for early July.

Meanwhile...My sister's new baby has arrived. She is healthy and beautiful and my amazing sister got through it all in her usual supermodel style complete with poise and grace.

Giving birth is a magical event, and even my boys (including the 2 yr old) were stunned that this tiny new cousin has arrived and is now open for having her toes tickled. I could go on for pages here, but let me just state for the record that she is awesome and we are all so lucky to know her.

I started the worlds smallest baby hat for her today. I think I can finish it pretty quickly. I wish I had completed a new quilt for her, but that is also on my to-do list.

In other wanderings, if you have the chance, pls do check out Lori's blog - Humble Quilts - her recent cherry block is really adorable, and her blog in general is beautiful.
Posted by Marisa at 11:02 PM 4 comments:

Japanese Taupe Fabrics - never too much of a good thing 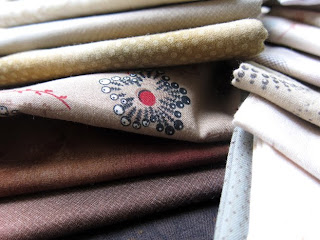 I was looking through my stash of taupe fabrics in preparation for my next house quilt class later this month.

There were so many beautiful ones, it is hard to choose at times. Especially when working with the subtle shades of taupes I have found that seeing them in daylight is an important part of the process.

It isn't always easy for me to pick out the fabrics during the day since my creative work is mostly limited to after hours, but I was able to look while the sun was up today so that was nice.

In the afternoon I visited with my monthly quilt group, which was fun. It's always awesome to see my old friends and get inspiration from the projects they are working on.

The hostess let me see her fabric collection as she had newly organized it, and she stores her fabrics as flat as possible with really not that many folds in it.

Since I have a BUNCH of fat quarters, I end up folding them a lot and putting them into bins. Seeing how she organizes makes me wonder if I could find a way to store my fabrics with less folds in them so that they have less chance to have permanent damage due to the folds.

How are you storing your fabric these days? Am I the only one obsessed with stuff like 'no light' getting in, and 'no folds' causing permanent creases?

Have a cool tip for me to avoid crease lines? I'm all ears. 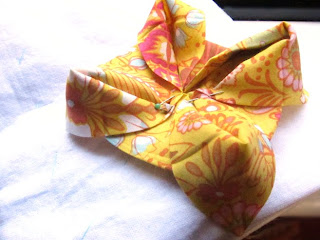 When I was thumbing through my latest copy of Quilts Japan May 2011 Issue #140, I was reminded of how pretty folded flowers can be.

On page 44 of this issue there is a little wall hanging of folded flowers where the blocks are made from tiny floral print fabrics.

This got me to thinking about the possibility of making folded flowers out of Liberty of London fabrics. Although it would be a decent chunk of work to undertake a quilt like this, it is hard to resist the temptation to start something up.

As an experiment, I took some small floral fabric and worked one small block up to see how hard it is to do. The pictures in Quilts Japan were helpful, but of course the text is in Japanese (which I cannot read).

I then remembered that I somewhere had a copy of Fantastic Fabric Folding by Rebecca Wat. This book was published back in 2000 and is still available at Amazon here.

On page 25 there are nice diagrams with explanations in English that help you make these cute little flowers. The book itself has lots of other cool folded fabric flower projects too.

Not starting a big new quilt project tonight or anything - after all it's almost midnight - but tomorrow is another day!
Posted by Marisa at 11:13 PM 1 comment: